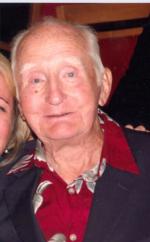 Eugene Leo Casey, Jr., of Erial and formerly of Glendora and North Camden left this life to join his beloved wife Marge on August 10, 2010 surrounded by his loving family. He was 89 years of age but maintained a spirit that never grew old.


Born and raised in North Camden Leo lived a life of service to others. As a devout member of Holy Name church he gave countless hours of volunteer service beginning as an altar boy. He enlisted in the United States Navy and served as an aircraft mechanic during World War II based in Hawaii. On May 12, 1943 he married his sweetheart Marge while on a brief leave. After the war he and Marge moved back to North Camden where they raised their children. Many boys now grandfathers knew him as their baseball coach at the 210 Little League where he made sure that everyone played regardless of ability long before this was a popular concept.


During their later years Leo devoted himself to Marge's care until her passing in 1991 shortly after which he became a founding member of St. Edwards Food Pantry where he worked tirelessly as a volunteer for the past 19 years serving the community, feeding over a 100 plus families a month. Leo was a 4th degree Knight of Columbus and an active member of Archangel Council #7429 in Pine Hill. He also was a member of Sheet Metal local 19 Retiree's club and a member of the American Legion Post 184 Wildwood, NJ.


Leo is the beloved husband of the late Margaret (nee Cuff). Devoted father of Jack and his loving wife Sue, Mary Ann Miles and her husband Jim who was Leo's buddy and cohort in crime, beloved grandfather of John Casey, Jr. (Stephanie), Michael Casey, Regina Pirolli (Ken), Jim and Sean Miles, great-grandfather of Danny, Steven, Jake, Zack, Juliana and Jenna-Bug and proud uncle of a very special nephew, Capt. Dan Cuff, USN (Casey). Leo is survived by his sister Eugenia and predeceased by his parents Eugene and Mary and his sisters Marie and Theresa.


Donations may be made in Leo's memory to the Food Bank of South Jersey.

The attached photos are added to the memorial of Eugene Leo Casey, Jr. to help share their legacy.