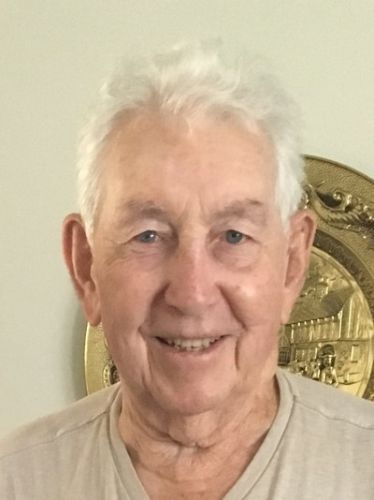 Wallace D. Carey, age 93, of Magnolia, unexpectedly passed away on October 9, 2019. Wallace is survived by Helen, his wife of 63 years and three sons and daughters-in-law: Wallace & Deborah, Thomas, and Stephen & Cecelia. He has two beautiful grandchildren Rebecca Rahill Carey and William Wallace Carey.

Born in New York City to an Irish immigrant mother and hard-working father, Wallace spent the better part of his life at sea. He enlisted with the United States Navy in April 1944 and spent twenty seven years at sea with tours aboard the USS HW Gilmore AS-16, LSSL 68, Valley Forge CVA-45, Bluebird MSC -121, Nitro AE23, Essex CVS-9, and the San Pablo AGS-30. From Seaman to Lieutenant, it was a truly wonderful adventure traveling the globe! Moving from city to city, state to state his position in the Navy changed several times over the course of the next 3 decades. Virginia, Rhode Island, Florida, and Michigan.

His final port of call was Philadelphia Naval Yard, Damage Control Training Center where the family then settled in Magnolia, NJ. Their life settled in for the long run as he ended his military service in 1971. Wallace was chief engineer for the Cherry Hill Medical Center and then was the head of maintenance and facilities for Campbell Soup Company in Camden, NJ, for another ten years. Smooth sailing into his second retirement, Wallace had earned it but never stopped. They were very active with several camping clubs: Safari Club, Wings of Shasta, and the Susquehanna Wagoneer' of PA. They traveled extensively across the United States via tent, slide in, motor home, and Fifth Wheel. At 93, Wallace was still going strong and would frequent the Campbell Soup gym and would attend events with the Campbell Kids Retirees. He was an ardent church member, first at St Gregory’s and then St. Teresa’s in South Jersey. Loyalty, passion, dedication -- these words describe our father.

Wallace was a beautiful person, son, husband, father, and grandfather. His legacy is love, passion, integrity, conviction, dedication, loyalty, but in the end Wallace was a truly wonderful human being.

There will be a viewing from 5pm to 6pm Tuesday, October 15th at GARDNER FUNERAL HOME, RUNNEMEDE.

In lieu of flowers, donations may be made in Wallace’s name to a charity of the donor’s choice.

Plant a tree in memory of Wallace

The attached photos are added to the memorial of Wallace D. Carey to help share their legacy.

Provide comfort for the family by planting a tree in memory of Wallace D. Carey